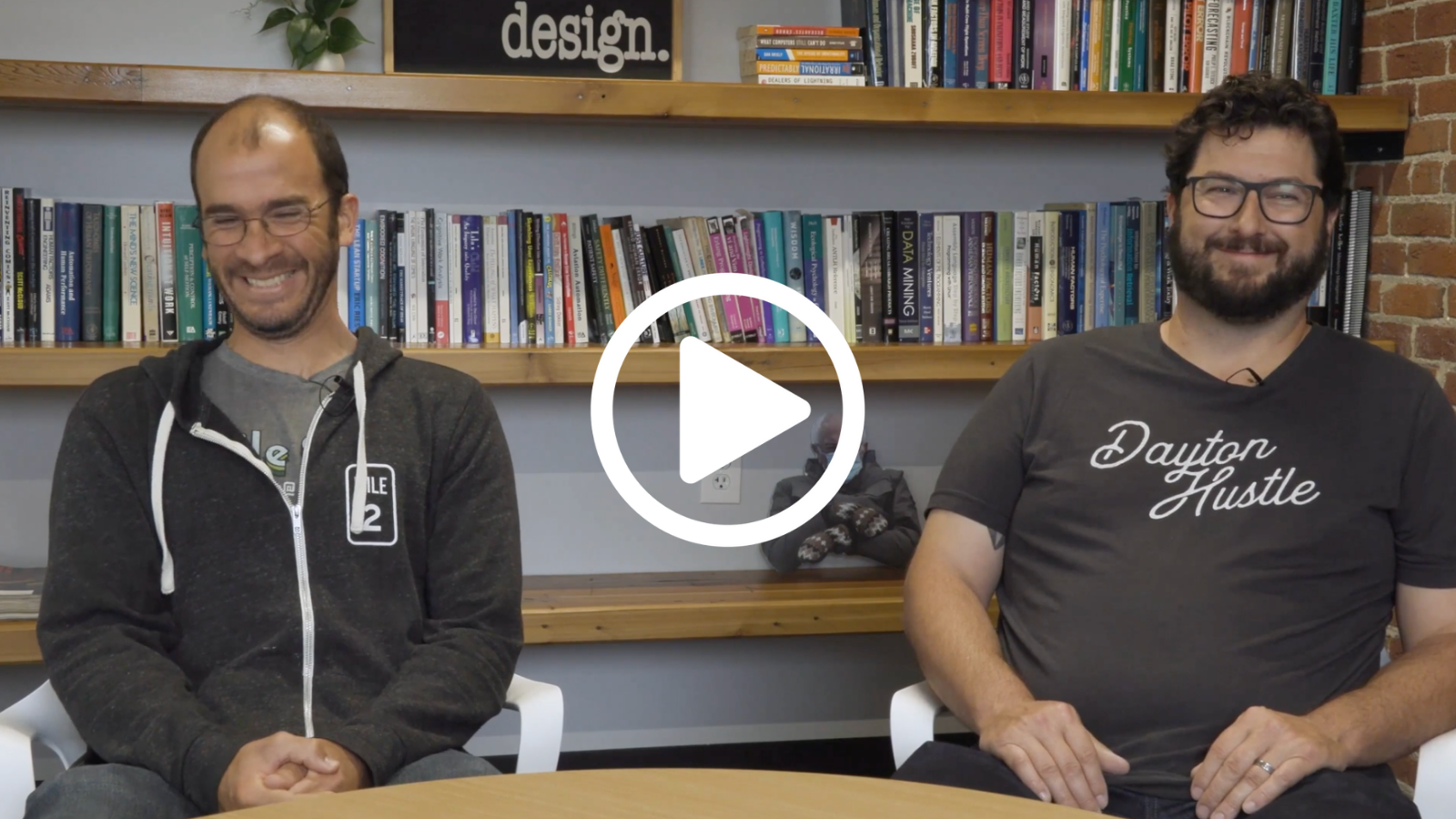 When Jeff Graley and Jorge Sanchez joined forces to launch Mile Two in 2015, they had a clear goal — to do cool stuff with cool people.

“Technology is advancing at a pace that’s just fascinating over the last several decades. How do you bring people, technology and work together? That mission was the same over there inside the fence as we have here at Mile Two,” Air Force veteran Jeff Graley said. “We want to stay on the cutting edge of technology, and as you’re doing that, how do you make sure that people are involved so you can accomplish the mission?”

Jeff and Jorge did that by putting down roots in downtown Dayton and building a now 100+ strong team that is as focused on the community as on the work.

“If you just look at Third Street, Second Street, First Street, how much they have changed over the last five years, we’ve been a part of that, and I think that has been really cool,” Jeff said.

“Community has always been a huge part of what we do,” Jorge agreed. “Having the ability to run with our own sense of what giving back means [as we’ve built our company] has been very rewarding as well.”

“I grew up in southern West Virginia, very much in the coal fields. There were poor people and middle class people. But there was community. If someone had something or someone needed help on a project, everyone dropped what they were doing to go help them,” Jeff recalled. “I saw multiple instances where my dad, on his vacation or weekend, would go help the neighbors build their deck because he saw that they didn’t have all the skills or understanding they needed to do that, so that sense of community, that sense of ‘Hey, we’re all in this together,’ shaped the way I look at the world, and the way Mile Two interacts with the world.”

Jorge credits his time at University of Dayton for strengthening his own focus on community. After college, as he got involved in downtown Dayton, he worked with Bicycles for All.

“We’re very like-minded,” Jorge said of his co-founder. “I went to school at UD, and one of the mottoes there is ‘learn, lead, serve.’ Service has always been part of what I’ve done in my life, and bringing that into the company as well. I was involved in a lot of work downtown with Bicycles for All, working to empower people that needed transportation and help people get fit and help kids entertain themselves, and that just stuck with us. Being able to do the right thing with people has always been a pivotal part of what we do.”

The year the pair launched their company, Jorge also found himself caring for a newborn.

“Being able to manage the lack of sleep at home, and being present both at work and at home, ended up at some points being a challenge, because one of them is always competing for attention over the other,” Jorge recalled.

The experience of being a new parent is an apt metaphor for launching a startup, Jeff says.

“The newborn drives your schedule,” he said. “You don’t decide when they’re hungry, or when they wake up, or when they need your attention. You have to be highly adaptable, but still get the other things done during the day that you need to do.”

And to pull it off, you have to truly believe in what you’re doing, Jorge says.

As their children get older, the fathers are excited for the opportunity they have to be an example of entrepreneurship for their kids.

“Nobody talked about entrepreneurship when I was a kid,” Jeff recalled. “There were no good examples of what we’re doing when I was a kid, but my kids, and my kids’ friends, get to see that. My daughter was here with two of her friends, and they were looking over the shoulder of one of our female software developers, and the only reason the female part is relevant is, the girls were standing behind them and they said, ‘I don’t think I could ever do what you do,’ and she turned around and said, ‘Be quiet, don’t you ever say that, you can do any of this stuff, it’s just software, it’s just stuff you gotta practice and learn’.”

It mattered to see a role model who looked like them, Jeff said.

“They walked away and thought, ‘Maybe I can do that,’ so just being able to crack that door where she thought it was closed, and having a representative within the company to be able to that, for me, that’s a huge impact.”

Bring your creative vision to life with SamiDubzArt