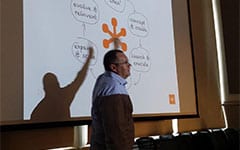 James Ferguson has big ideas. Lots of them. So many, he founded his agency, Big Idea Group. James also happens to be a consultant for Dr. Oz Show – and he’s coming to Dayton on April 13th to present at the Founder Institute Startup Ideation Bootcamp at The Entrepreneur’s Center, 714 East Monument Ave., at 6:30pm.

Dayton has seen a resurgence of startup activity, most recently with the Founder Institute exploring a local launch of their global accelerator program.

The Founder Institute is the world’s premier startup launch program for talented entrepreneurs. The accelerator is based in San Francisco, and has launched over 2,500 companies globally in 60 nations through their comprehensive program. Started in 2009 by Adeo Ressi, Founder Institute is the world’s largest idea stage venture accelerator with notable, billion dollar valuation graduates such as Udemy and Realty Mogul.

Dayton has a rich engineering and product development tradition, with many entrepreneurial thinkers who want to launch their own company. Founder Institute sees a strategic opportunity to establish their “founder-first” focused program, which is designed as a step-by-step process to develop great company leaders.

Rather than focusing on the idea first, Founder Institute looks for the characteristics and attributes necessary for entrepreneurial success. Using a proprietary, predictive admissions test, Founder Institute can forecast an individual’s likely success as an entrepreneur with an approximate 85% degree of accuracy. And it has over 2,500 companies launched around the world as correlative proof.

What is the success rate of graduates? Nearly 80% are still in operation after two years, and 50% receive investment capital funding. Pretty solid.

If you’re thinking about starting a company, attend one of the upcoming Founder Institute events scheduled for the area. Learn more at http://fi.co

Update: We originally released this story referring to James Ferguson as the CMO for the Dr. Oz show, information which we later found out to be incorrect. James is a consultant to the Dr. Oz show and has helped design campaigns for episodes.

Silicon Valley based Founder Institute is testing the Dayton market for a new launch, which you can read more about here.