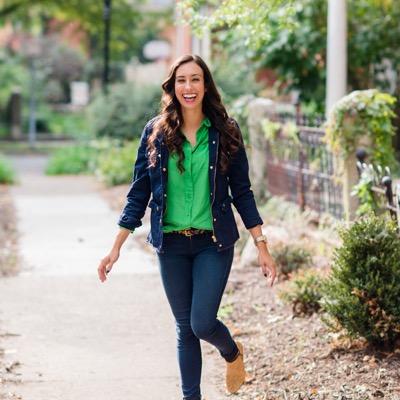 DO YOU KNOW LEA RICHARDS?

Lea is the Founder and President of Pig of the Month BBQ, an online mail-order company renowned for their world-class BBQ and savory treats (like Bacon Jam–yum!). This self-proclaimed “head hog” has taken the previously male-dominated world of BBQ by storm, and has done it all out of her Dayton-based warehouse, proving that in this age of e-commerce, the skies the limit for the internet savvy entrepreneur. “As a business owner, you have to figure out your balance, so you don’t get burned out.

For as long as Lea Richards can remember, she has loved to cook. She said, “I was the strange little girl  sitting with a cookbook in my lap, watching Food Network.” It would seem, though, that her desire to create scrumptious culinary concoctions isn’t so strange after all, given that her common bonding activity with her dad was to search out and sample BBQ recipes from around the world. It also comes as no surprise, then, that it was her father who urged her to found Pig of the Month BBQ.

She said, “I bought my dad a gift-box of BBQ from a mail-order company that had received high reviews. Unfortunately, the product itself was disappointing, and my dad said, ‘Our BBQ recipes are way better than that.'” So her dad, who owned a company that operated out of a warehouse, offered her space from which to start her business.

“I was hoping to just sell all the spare ribs I had in the freezer,” she recalls of her humble beginnings. Little did she know at the time, that someone (a person who remains anonymous to this day) sent a package of her BBQ to Good Morning America. Before she knew it, her product was featured on the popular morning show, catapulting the scale of her business to a whole new level.

“We received over 4,000 orders that day, “Lea noted, chuckling over the memory of the chaos that ensued, as she worked to fill all those orders with the help of anyone she could get to lend a hand, including her father’s employees. “We literally set the warehouse on fire!”

Since then, Lea has been conquering the realm of BBQ one saucy package at a time, and now she does so with a smile on her face and confidence in her step–which wasn’t always the case.

“I’ve always had the travel bug,” Leah shared, “but there was a point when I was overseas with my mom and dad, and I was so overcome with anxiety about my business that I couldn’t function. That’s when my mom told me that I was either going to figure something out or do something else.”

So Leah went home and began developing both systems and a team of talent, so she could feel confident that even in her absence, Pig of the Month BBQ would operate according to her vision.

“I’m a big fan of writing everything down,” she said, referring to the operating manuals she put together so that her employees always had a reference for how to perform specific duties. “That allows me to take some time off when I need to recharge. Business owners go through cycles where one moment they feel super pumped about growing business and the next moment they feel drained.” She cited the teachings of Tim Ferriss that helped her see the value in “deloading”— a sports training concept that promotes periods of downtime to prepare for intense periods of athletic training. In the business world, this translates as taking time to allow your body to refuel mentally and physically, resulting in renewed perspective and refreshed creativity that can then be used to grow your business.

Her adoption of this business practice seems to be working well, as her business continues to expand its reach and pivot in the market, servicing celebrity clients and everyday Joes alike. She even has another business in the pipeline and is currently branching out to share her knowledge and experience with other entrepreneurs at events all over the country.

With so much vision and an impressive capacity to achieve her goals, we can’t wait to see what’s next for Lea!

Want to connect with Lea and the rest of the Pig of the Month BBQ team?