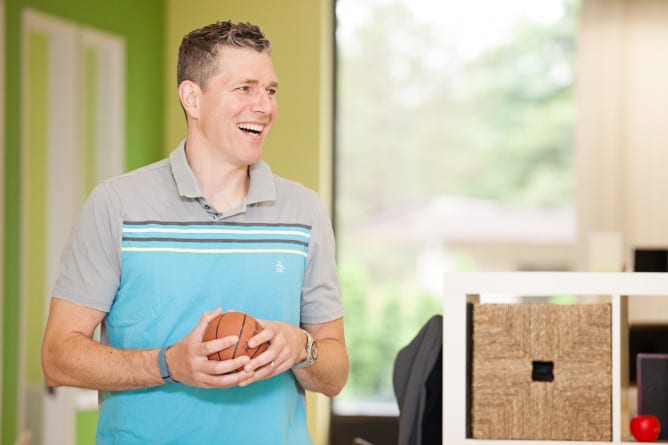 This story, written by Madeline Vuong, first appeared on geekwire.com. You can read the original here. Henry Albrecht, CEO of the Bellevue-based health and wellness technology company Limeade, believes that sales are the most important part of any startup’s success — a position he argued convincingly at his talk at the recent GeekWire Startup Day.

Founded ten years ago, Limeade has grown from a “startup in the basement” to a business employing almost 200 people, Albrecht said. He credits this in part to the Limeade board’s unwavering focus on sales.

“If you don’t have sales, you go out of business and your business dies,” Albrecht said. “New sales are the only thing that can keep your startup going when times get rough.”

He advised putting substantial money into a startup’s sales team because talented salespeople are an investment in the future of the business.

“If [your sales team] is producing well, they’ll be extremely expensive, but they’re also the lifeblood of your business,” he said.

Albrecht’s rule of thumb is to make sure salespeople are making three times what the CEO makes, including salary and commission. And at that price, it pays to hire wisely. If Albrecht loses a salesperson because he’s made the wrong hire, he says, it’s more than just losing an employee. It’s also losing all the customer relationships that the person has cultivated.

“Sales are based in emotional relationships,” he said. “When you lose a salesperson, you have to begin your work from the very bottom. Every relationship that they ever built will have to start over from scratch.”

While he stressed the importance of adequate compensation for a startup’s sales team, Albrecht also warned against paying too much too early. In Limeade’s infancy, the company held an initial focus group for their product and found that only 2 out of the 30 people who tried it would describe it as a “tolerable experience.”

Had Limeade already invested in an expensive sales team at that time, it would have been too early, because the startup didn’t yet have a product worth selling. Either the sales team wouldn’t have succeeded at all because the product wasn’t ready, or their talents would have prevailed, but then they would have been faced with dissatisfied customers and broken relationships in the long term.

When Limeade was just a 4 person startup, it had the opportunity to sign up WellPoint, a company that was the largest health plan in the world at the time, with 35 million members. Albrecht compared going after that sale to going after a whale with a tiny knife.

“Had we signed them up, we would have been killed by them,” he said. “Going after them was a waste of resources.”

Instead, Limeade worked its way up the customer food chain. At first, its clients were companies with just a few employees. But using those clients as references, Limeade sold to a company with 35 employees, and then to a company with 200, said Albrecht.

“Now, our biggest customer has 200,000 employees,” he said. “But you never get there without some references from the prior level in the food chain.”

Sometimes, Albrecht admitted, the sales you pursue aren’t completely under your control.

If your startup needs money to survive, you sell to whomever will give you that money, and ideally, who will give it to you up-front. It’s good to say no to sales outside of your comfort zone when you can and only say yes to the sales you know you can handle, he said. But that is the ideal scenario.

“There’s going to be a question, in your time as a startup, where you have to answer ‘yes’ [to a sale],” he said. “Even if you have no idea whether you can fulfill the request.”

Once, Albrecht was told that Limeade wouldn’t make payroll unless they made a big sale. For the company, it was do or die.

“Our biggest customer at the time was about 900 people and we had an opportunity with a 10,000-person company,” he said. “‘No’ wasn’t an option because if we [didn’t] get the deal [we were] going to go out of business.”

The potential client wanted Limeade to be compliant with some highly specific terms with which Albrecht was unfamiliar. Albrecht knew he needed the sale, so he went ahead and promised that Limeade would be compliant with those terms, whatever they were, and that he would provide written confirmation of that before launching so that his client would feel comfortable.

When the client left, Albrecht turned to his team and said, “What the hell is this?”

Then, he redirected every resource in the company to finding out and to fulfilling his end of the deal, he said. It worked out. Limeade made itself compliant with the client’s terms, closed the sale, and Limeade survived.

As with that sale, all successful deals will be responsive to the customer’s specific needs, Albrecht said. But for a company as a whole to be successful, it can’t be too responsive, changing itself fundamentally for every sale it makes. Ultimately, a startup will only work out if it follows its own clear internal sense of direction.

But this balance is hard to negotiate. Because a company’s survival simultaneously depends on being flexible enough to make sales and on being inflexible enough that its vision is preserved, it’s hard to figure out which sales to close and which ones to pass up.

“You have to both listen and ignore,” said Albrecht. “You have to have a vision, and you have to pivot. It’s all a balancing act and that’s why it’s so tough.”