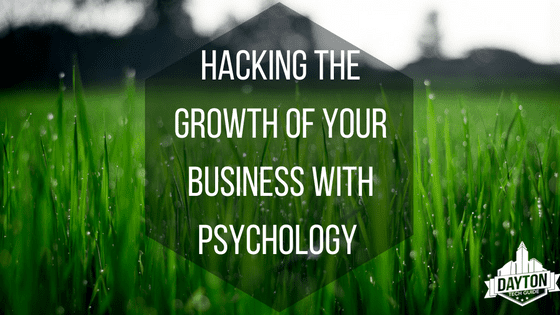 In 2010, the American Management Association released a comprehensive research compilation that explored the top 500 largest companies in the world. Through interviews, data collection, and analysis, they were able to identify patterns and methods related to growth rates among successful businesses. One of the patterns that they were able to find was that growing companies had instilled a strong company culture and mindset surrounding growth strategy, corporate entrepreneurship, and business innovation. Much of these concepts involve a solid understanding of psychology. Psychology is not always just understanding the abnormalities in human behavior or the traditional view of psychology that involves a therapist and a couch. Psychology is the study and understanding of human behavior across all areas or walks of life.

Growth hacking is widely misunderstood and is often just referred to as glorified marketing. Some proclaim that growth hacking is a load of crock and some swear by its important shift in thinking for business professionals. Growth hacking requires a knowledge of product development, distribution, and the talent to unlock technology-based opportunities for growth that often go beyond traditional expectations. The very best growth hackers think like strategic marketers and how it relates to the influence of customers but obsess of the ideas that could drive user growth. The very best growth hackers and business professionals of our time lean on simple psychological concepts that play a big part in achieving success. If you aren’t able to understand how people think, how customers might react, or what drives attention – you’re likely to fail in growth hacking. We have compiled several psychological studies that show key insights to help growth hackers achieve real success.

If I give you something you may feel obligated to return the favor later on down the road. This is the simple concept of reciprocity and when applied correctly, can be very influential on consumer behavior. In 1971, Professor Dennis Regan at Cornell University demonstrated the power of reciprocity in an experiment where subjects were asked to rate the quality of chosen paintings as part of an experiment on “art appreciation.” In the experiment, subjects were asked to rate paintings with a partner. Unknown to the subjects, their partner, Joe, was in fact the research assistant.

In each exercise, Joe would behave the exact same, including leaving the room for a brief period of time and returning a little while later. For some, he would bring back a soft drink. For others, he would return with nothing.

At the end of the exercise, Joe asked the subjects to do him a favor and purchase raffle tickets from him for a quarter each. The subjects who had received a soda were far more likely to purchase tickets, even though the tickets were far more expensive than the value of the soda.

Overall, we enjoy being around and doing business with those that help us in some way. Give something of value to the consumer and perhaps you’ll get something valuable in return. As a brief word of caution, don’t expect anyone to do so. Just give generously and be delighted in whatever you receive. Compliance with Freedman and Fraser (1966)

Many years of psychological research demonstrates that when people are asked to make a small commitment first, they are more likely to comply with a larger request down the road. In psychology, this is called cognitive dissonance. Once a person has committed to something it becomes part of who they are, how they see themselves, and how they want others to see them, too.

In 1966, Jonathan L. Freedman and Scott C. Fraser conducted one of the first studies that effectively demonstrated the foot-in-the-door method. In this study, researchers contacted California housewives by telephone to ask them to answer questions about the household products they use. Three days later, the researchers called back. This time they asked the same housewives if they could send a number of men to the house for two hours to manually take account of the cleaning products in the home. The women who initially agreed to the smaller request were more than 2x as likely to agree to this larger request.

Think about the customer and the life-cycle they may go through when purchasing your product. The more frequently a customer opens your emails, downloads your content or goes along with your request, the more likely they are to comply with larger requests like sharing your social media content or referring a friend to your company. Loss aversion is another commonly referenced cognitive bias in marketing. Essentially, people tend to feel the negative effects of loss more strongly than they feel the positive effects of equivalent gains. For example, if you won $500 in a community raffle, you’d be pretty happy. But if instead you lost $500 in a community raffle the level of loss you’d feel would be more intense than the happiness you’d feel if the tables were turned.

According to Daniel Kahneman, and his colleagues Jack L. Knetsch and Richard H. Thaler, loss aversion can be applied even on small-value goods. In their 1990 experiment on loss aversion, they randomly assigned participants to either a “buyer” or “seller” group. Sellers were each given a mug. Buyers were given nothing. Later, participants were asked to trade with each other. The researchers found that the sellers required significantly more money to part with their mugs (around $7) than the buyers were willing to pay to acquire them (around $3).

Loss aversion can be achieved by offering risk-free trials, rebates, and pricing products strategically; avoiding additional surcharges, usage fees, and other additional low-cost expectations. Again, it comes back to your responsibility to ensure the user experience is positive, demonstrating value for your product, and meeting customer expectations. Dissolve their fear of what they might lose by first understanding what those losses might be and creating a product that alleviates those fears from the start.

Experiment on conformity by Solomon Asch

Something that is commonly misunderstood is that humans are social beings. It is our goal to find a group and we want to be liked. Many Psychologists refer to this as conformity.

In a famous 1951 experiment, Solomon Asch showed that group pressure can influence people to make the wrong decision even if the right decision is obvious.  Asch had college students participate in a “perceptual” task along with a group of other students, who were actually hired actors.

The participants were shown a card with a line on it, followed by a card with three lines on it, labeled A, B, or C. The college students were asked to say aloud which of the three lines matched the length of the first line that had been shown. In each of Asch’s experiments he instructed the actors to give the wrong answer. The result? A large percentage of participants followed the majority and chose the wrong answer. Only when one acted as a “dissenter” and gave the right answer did the power of the majority influence weaken.

Identify key influencers and industry leaders and get them to use your product. Encourage them to tell their network about the value in your product and take their advice and critiques and make adjustments and improvements as needed. The more authority you can attach to your product, the more likely you are to achieve growth from the start. If you’re a startup or an evolving business, if you’re B2C OR B2B, the fact remains that you are always speaking to humans. The understanding of human behavior is a key component to converting the strangers of our world to potential customers. When you use growth hacks that leverage the psychological triggers and grab the consumer’s attention, you will see the significant results. There are plenty more groundbreaking studies out there that relate to psychological influence.

Begin your search and develop your mediocre idea into something great.

Check out our other highlights and subscribe to our newsletter while you’re here!