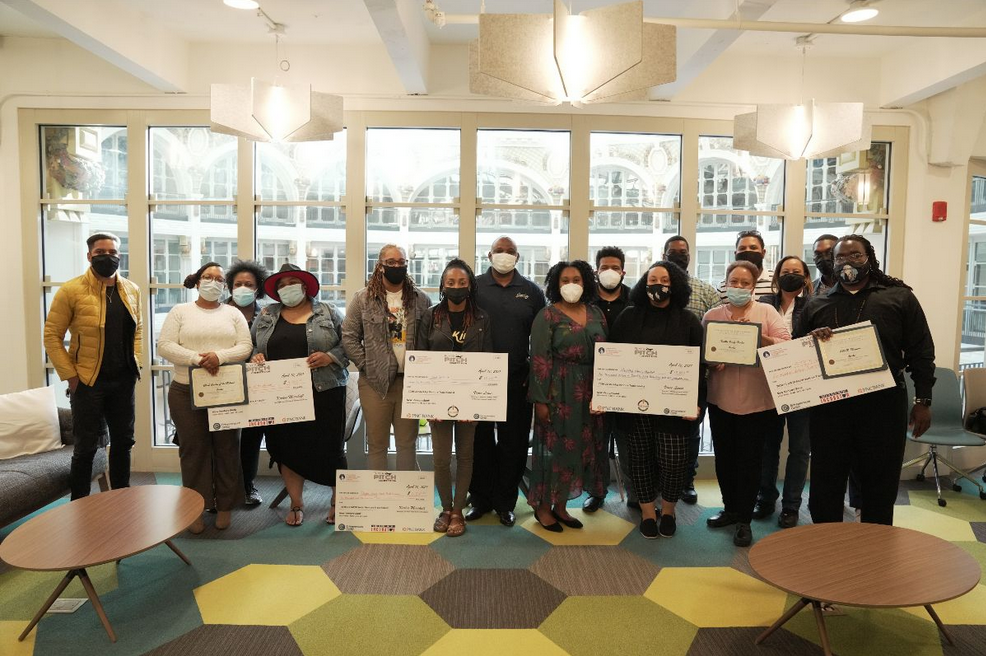 The University of Dayton Flyer Pitch competition announced its 2021 winners April 26 in a ceremony hosted at The Hub Powered by PNC Bank at the Dayton Arcade, awarding $137,500 in cash prizes and support.

“The social venture track was an ideal way to support social innovation for Greater West Dayton neighborhoods at the intersections of entrepreneurship and social justice,” said Karlos L. Marshall, GWDI manager. “Collectively across both tracks we awarded $65K to Black founders in the final round, including $35K to Just Cakin’ It, a mobile dessert lab founded by a Black woman from West Dayton.

“We expect this competition to be a catalyst for closing funding gaps in our community moving forward.”

Illume Fit LLC was selected from among more than 31 teams that pitched ideas during the competition, one of the largest at the college level. The team included Dayton community members Jack Randall, Anna Randall, Phillip Horn and Bryce McGuire.

“This year’s group of startup track teams included some of the most entrepreneurial founders we have had in the competition to date. The judges decision to fully fund Illume’s ask was based on the progress the team made over the last several months, and the overall opportunity,” said Vince Lewis, director of the university’s L. William Crotty Center for Entrepreneurial Leadership. “We look forward to Illume adding to Flyer Pitch’s successful legacy, which includes 74 businesses and $24.1M in capital raised.”

The inspiration for Illume Fit LLC came when Jack, a two-time winner of Cincinnati’s Flying Pig Marathon, and a friend were running near UD’s campus, and his friend had a seizure. Fortunately they had a mobile phone with them; had this not been the case, the outcome could have been different. This inspired Jack to consider how endurance athletes can assure the right people will be notified if something unexpected happens during training.

The Illume team will use the funds to finalize the mechanical and electrical design, initiate software development and lay the foundation for future IP strategy.

“We are very thankful for the opportunity Flyer Pitch has provided our team,” Jack said. “The funds generated through the Flyer Pitch Competition will help in progressing the Illume mission by allowing us to get one step closer to launching our minimum viable product.”

“We are excited to win the grand prize for the Flyer Pitch Social venture track. We started this project recognizing we live in a community full of talented people, and with these funds we are one step closer to providing the resources to help members of the community flourish,” Alvin said. “We believe everyone is a maker in some way and with the resources that the Makerspace will provide we hope to further highlight our community of creatives and entrepreneurs.”

Alvin said the group of three engineers and a project manager started the idea with just a space where they could share their tools and ideas. Inspired by how Dayton’s Gem City Market formed a community grocery story for West Dayton, Alvin and his partners expanded what they were doing with the help of Co-Op Dayton to share their space with others in the community.

The Flyer Pitch Competition is an annual competition sponsored by the University of Dayton’s L. William Crotty Center for Entrepreneurial Leadership and the Greater West Dayton Incubator in partnership with PNC Bank and the Entrepreneurs’ Center. Now in its 15th year, Flyer Pitch awards more than $100K in cash prizes and more than $50K in in-kind prizes during the competition.

Sixty teams competed for prizes in this year’s Flyer Pitch competition. Finalists were awarded cash prizes and in-kind support. In addition to the winners, finalists include: