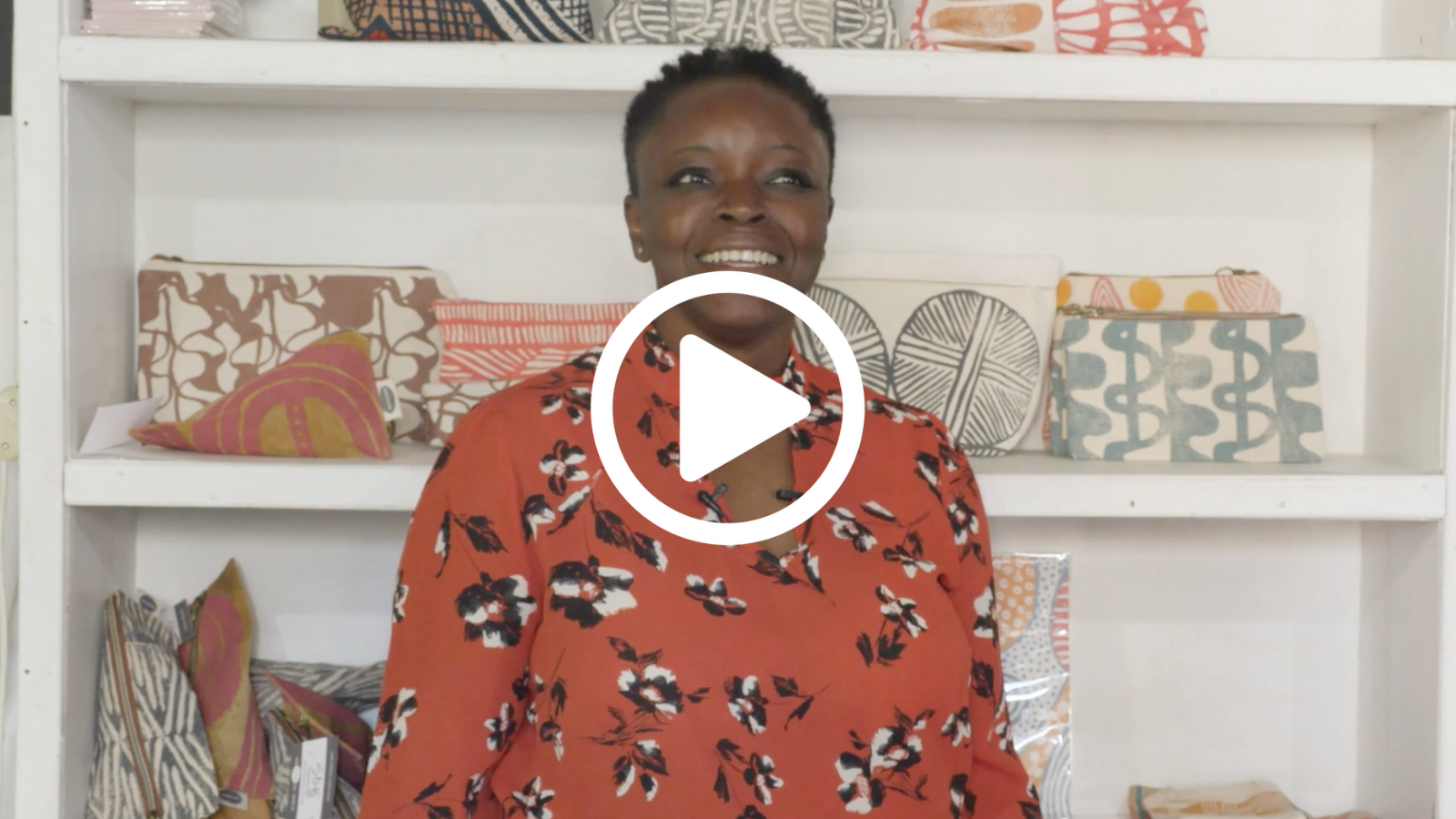 Yaytoonday founder Yetunde Rodriguez has always been inspired by patterns and fabrics — today, that love is part of her business, creating and blockprinting textiles that she turns into beautiful home decor and personal accessories.

“A lot of my design is African-themed,” she said. “Originally I’m from Nigeria in West Africa. I grew up seeing a lot of fabrics, fabric was very central to our culture.”

She also grew up surrounded by makers.

“Where I come from, people make things. If you don’t have it, you make it,” Yetunde recalled. “That’s probably a little different now with globalization, but I grew up seeing my mother, aunts, all the women in my family had some sort of enterprise.”

At the time, she didn’t realize how experiencing that way of life would eventually influence her, she said.

Yetunde’s family moved to the U.S. in the late ’80s, landing in Morgantown, West Virginia. Her father completed his Ph.D. at West Virginia University, and Yetunde began attending that same university after graduating high school ‚ but it didn’t stick.

“I was aimless, I didn’t last very long there,” she recalled. “After a year and a half, I had to take a break.”

So she decided to join the military.

“Nobody in my family had ever joined, it was foreign concept, but it fascinated me, the discipline, having a mission, all those ideals fascinated me, so I joined,” she said.

She thought she’d become an officer, so years later, she found herself back in school — but this time, the military didn’t stick.

“I got to college and was like nope, I don’t want to keep doing the military, that was fun, I’m done now,” she recalled.

Instead, her second run at college would bring her back to a first love, via a printmaking class.

“I got into this through my love of surface pattern and graphics,” she said of her company. “I studied graphic design in college, during that process, I took a printmaking class where we explored different forms of printmaking, and I really enjoyed block printing, and that spurred me on to use that as my method of producing textiles.”

Yetunde’s husband, Danny, is a fellow U.S. Navy veteran. They raised their three children in Virginia until a job opportunity brought the family to Dayton.

“Dayton, Ohio looked like a good place to raise kids,” she recalled.

She got involved int he downtown Dayton community and that led to opportunities — you may have seen some of her most recent work, gracing the side of the new Gem City Market.

“The architect, Matt Sauer, had become familiar with my work, he loved my work, so when the opportunity arose for him to design the building, he asked me would I  be willing to help with the look and feel of the space, and I said, absolutely!” Yetunde recalled. “You want my little block shapes that I carved in my studio to grace the building, why not!”

Yetunde designed the diamond-shaped mural on the exterior of the building, as well as the designs on the aisle signs inside the community grocery store.

“I was very involved in the creation of the building. It was a long project, a couple years, very well worth it,” she said. “I never would have imagined the shapes I was creating, someone would want to put on a building, but that’s how it worked out, and I’m just so excited about it.”

Her advice to aspiring entrepreneurs? Be bold.

“That’s what it takes — saying yes. Whenever I saw an opportunity, whether to talk about what I’m doing or whatever it is — I always say, put yourself out there,” she said. “If you are just quietly working away and not showing what you’re doing, nobody is going to know about you. Be bold with it, go out there and talk to people about it, let everyone know what you’re up to, the help will come.”

“My name is Yetunde Rodriguez, and I am an Entrepreneur.”

Megan brings seamoss to the masses

At The Liquor Lab, LaTasha brings the bar to you

Ayauna Goodwin is a confidence builder